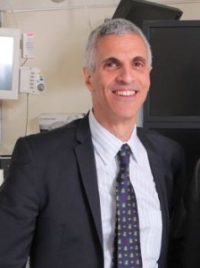 In a new milestone in the fight against DIPG, Dr. Mark Souweidane this week performed a direct infusion of a cancer-fighting drug into the brain of a young patient — for the third time. The child was the first ever to receive three infusions, all at the highest dose level in the trial.

The six–year–old, who was diagnosed with DIPG in January of this year, joined Dr. Souweidane´s clinical trial in June, when he was treated with an interstitial infusion (also called convection–enhanced delivery, or CED) of a drug intended to stop DIPG´s usual relentless progression. By delivering the drug directly into the tumor site, Dr. Souweidane avoids the difficulty of getting that drug across the defensive blood-brain barrier. (See more about the trial.) The child received a second infusion in July, and then was treated for a third time this week.

“He´s recovering beautifully,” said Dr. Souweidane of the patient. “An MRI immediately after the infusion showed excellent drug distribution in the brain stem and no unexpected findings. More importantly, he is himself. When I spoke to him the day after his treatment and asked what he wanted to be for Halloween, he told me he wanted to be Darth Sidious.”

Several children have been treated twice in the trial, but Dr. Souweidane says this child was doing very well, with no disease progression, which boded well for a third treatment. The patient’s parents were also persistent in their drive to have their child treated again.

“They´re already asking about a fourth treatment,” says Dr. Souweidane. The first phase of the trial ended this summer, when the 27th and final patient was infused for the first time, but the FDA has approved repeated treatments as an extension of the trial.

It´s too soon yet to tell whether and how the repeated infusions will affect the ultimate course of this uniformly fatal disease. But Dr. Souweidane says there’s no reason why other children who were treated already, even at the maximum dose level, can´t be treated again. He´’s energized by these latest treatments, and is already looking ahead to the future.

“Each of the three infusions contained the seventh and highest dose level tested in this trial,” says Dr. Souweidane. “The ability to tolerate three infusions in such a short time, and of the maximum dose, paves the way for one of the possible next steps in this avenue of investigation, which could be to implant an infusion system to deliver the drug without repeated surgery.”

Whatever the next steps are, Dr. Souweidane promises to be at the forefront of the research.