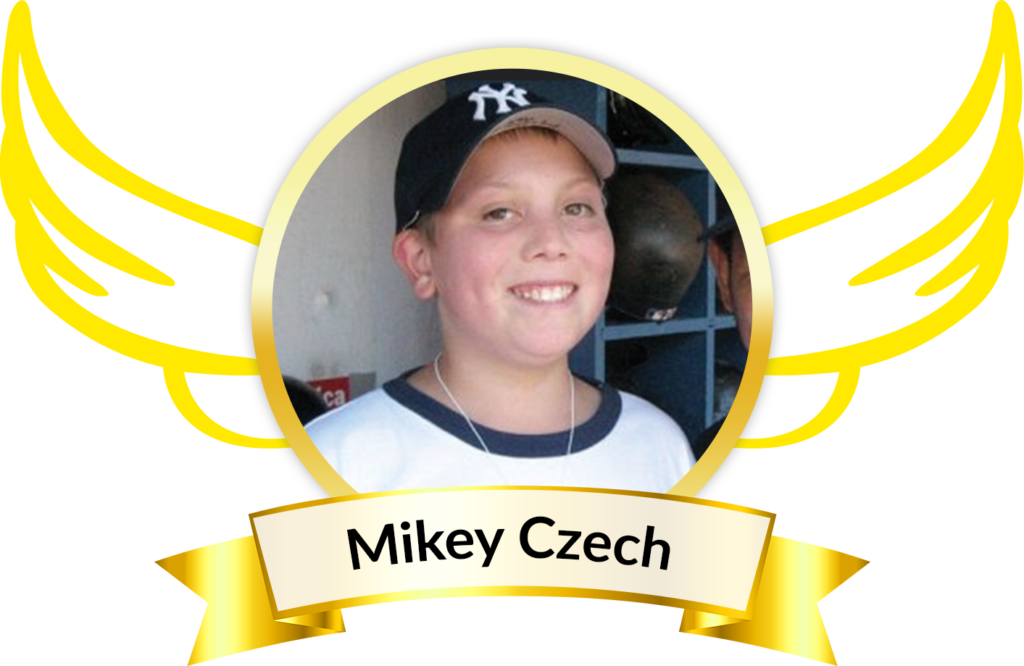 James Michael “Mikey” Czech was born on January 6, 1997. The younger of two children, Mikey was a happy, athletic, intelligent, caring, perpetually optimistic young man with boundless enthusiasm. He loved to run fast, work hard, listen to The Doobie Brothers, play his favorite sports of baseball and tennis and was a huge New York Yankee and Roger Federer fan. Mikey was a loving brother and son whose laugh was contagious and who had a huge smile that lit up a room and captured your heart.

On January 6, 2008, his 11th birthday, life as our family knew it, ceased to exist. Our only son was diagnosed with a diffuse intrinsic pontine glioma (DIPG), one of the most aggressive and deadly forms of brain tumors diagnosed in children between the ages of 3 and 16. DIPGs are inoperable, incurable and, until recently unable to be biopsied. Approximately 80% of patients diagnosed with DIPGs die within one year of diagnosis; Nearly 100% die within five years of diagnosis. Conventional treatment consists of general radiation and chemotherapy. Alternative treatments include various clinical trials (approximately 250 over the past 30 yeaers) which, to date, have proven no more effective than conventional treatment.

On January 24th, 2008, after seeking advice from five different medical institutions, Mikey was enrolled in a Phase II clinical trial of Motexafin Gadolinium at The Stephen D. Hassenfeld Children’s Center for Cancer & Blood Disorders at NYU Langone Medical Center. He also concurrently completed six weeks of IMRT radiation. Mikey’s treatment ended on March 6th, 2008. Throughout his treatment, Mikey never complained. He wanted to be a normal kid, playing baseball and football and planning parties for his friends. He simply wanted to be “Mikey”.

On April 17th, 2008, the first post-treatment MRI indicated that Mikey’s tumor had shrunk by 70%. Mikey’s second post-treatment MRI on July 17th, 2008, indicated that Mikey’s tumor had shrunk another 15% for a total of 85%. We were very hopeful, especially since Mikey was feeling better and was able to do everything he had done before he was diagnosed. He was in good spirits and we thought we were managing the tumor. He had a wonderful four months after his treatment ended. Unfortunately on August 1st, 2008, cysts began to form in the area once inhabited by the cancerous tumors, placing pressure on Mikey’s cranial nerves. He started to feel numb on his right side, couldn’t walk and was starting to have problems swallowing.

On September 7th, 2008, our beloved Mikey lost his battle and died unexpectedly at his home from complications associated with his brainstem tumor. He will forever be loved and missed by his friends all over the world, his family and by the community he loved so much.

Mikey was an inspiration to everyone who met him and who learned of his fight with cancer. The community embraced him because of the strength and courage he portrayed during his struggle. He was often referred to as an “Old Soul” because he possessed wisdom far beyond his 11 years. During the duration of his illness, Mikey never gave up hope. He was a perpetual optimist and a fighter. His motto was that he would “Never, Never, Never Give Up!”

His family and friends are committed to continuing Mikey’s inspiring legacy by establishing The Mikey Czech Foundation. The goal of the foundation is to establish the world’s leading neuro-oncology translational research lab and to help cure pediatric brain tumors, particularly DIPGs. By working side by side, we will find a cure.