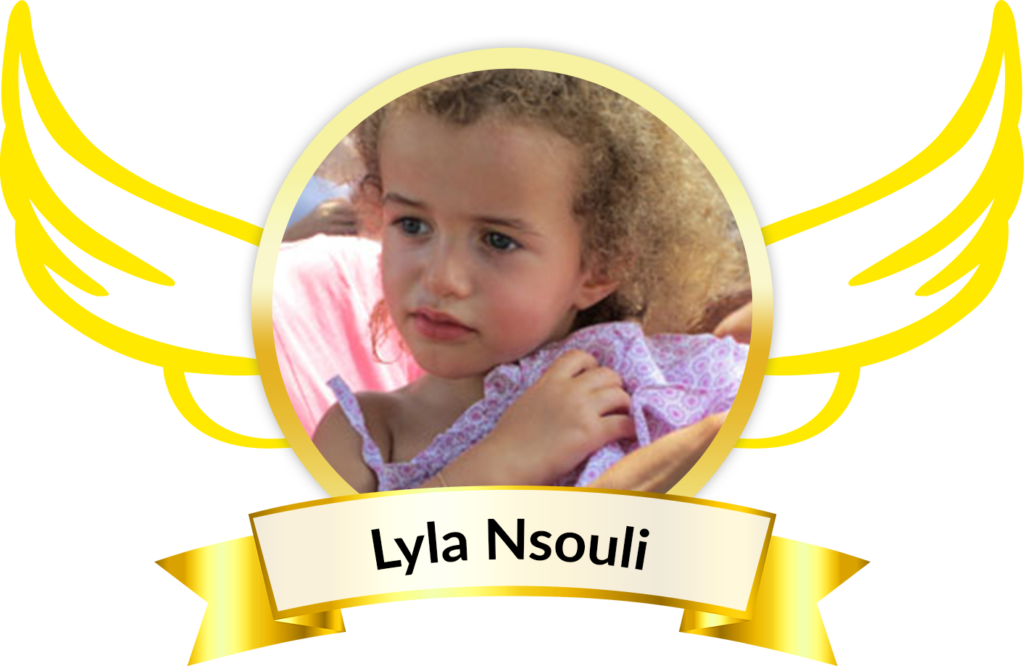 Lyla was born at 5pm on Christmas Eve, December 24th 2008. She had a natural delivery free of complications and was assessed as a totally healthy newborn baby. She immediately fulfilled all our hopes for our baby as new parents and our dreams for her future were set alight.

The first girl in a family with two generations of boys, she was doted on from the start by all of her family. As an infant, she spoiled us as parents by being a very easy, happy and relaxed baby. As soon as she could smile, she always had a friendly , engaging reaction to any new or familiar face that would peer down into her pram or cot. She grew big blue eyes, a huge toothy smile and a head of wild, curly hair her paediatrician once described as “spun gold”. We would rarely walk down the street without having someone smile at her or comment on her hair.

She was a normal, healthy gregarious child, full of energy who talked very early and who has always loved to sing and dance. Lyla would entertain any visitor to our home with her exuberant singing and dancing to The Wiggles or her favourite Monkey Music or Barney songs, as well as her “yoga” somersaults and stretches on the kitchen floor. She loved to dance with her “Dadda”, and anyone else she could pull onto their feet, when her music request was playing loudly at home in the kitchen.

She would often ask for “French music” and saunter and swing in the arms of her obliging father. As soon as she could speak, she demonstrated an amazing ability to remember the words and melodies of many songs and would often recite them as they popped into her head at any moment. We can recall being stunned to discover that at two years old she was singing along, word for word, to songs on the radio while driving in the car. At the age of 2 years and 3 months, she was able to spell her name and read most of the alphabet. By the age of 2 years and 9 months, Lyla was able to recite her mother’s mobile phone number and her home address.

Lyla also showed an early love to interact with people and a particularly strong affection and fascination for other children. She would be gripped with curiosity when she saw another child and would linger nearby until she was able to strike up a conversation or hold a hand. Alongside this affinity for others developed a strong sense of independence.

Lyla was never a fearful child and was always keen to try new things and do things on her own. She had a huge desire to explore her surroundings and was never one to sit still and play in one spot. Even in her much loved group music classes and gym classes, Lyla was always the one child who wouldn’t sit in the circle with the others when there were places to discover and new objects to play with.

Her constant desire to be on the move and get into anything and everything meant that we were always on our feet chasing after and making sure she didn’t get herself into trouble. She never needed encouragement to try something new. Lyla was always known for her extremely strong determination to do everything herself. “I do it! I do it!” was one of her most used phrases. Lyla also had a strong sense of mischief and a great sense of humour and fun from an early age. She loved to tease and be teased, to be goofy and silly and to be chased and chastised for her naughty behaviour, shrieking with laughter while shaking her head of huge, wild, curly hair. She was always fearless and when she would fall or trip instead of crying she would just look at us, smile and say “BOING”!

One of the few things that she would slow down for was to admire and collect one of her favourite things – flowers. In fact, there is little debate that “flower” was her first word. She would see flowers everywhere and point them out to whomever she was with. And she wanted to pick them anywhere she could. In one of our favourite photos of her, she is 18 months old and sat alone in a field of daisies in Hyde Park, content in a world of her own.

When she mercifully did develop a greater desire to sit still, it was apparent that she also had a huge love of drawing and painting. In the course of her illness and her treatment, this became a huge source of comfort for her. She loved to sit and paint and draw and adored having her face painted. When she asked others to draw, or got her face painted, her request was always for flowers and butterflies, and always in pink.

In the months before her diagnosis there were some changes in Lyla. Looking back now, these changes may have been early indications that something was wrong, but she was in her “terrible two’s” stage and becoming aware of the arrival of a new sibling, so it was difficult to relate them to a sinister illness. Even the experts in her disease agree that there is no way to distinguish this behaviour as something other than normal under those circumstances. Whatever the reason, these changes were a definite cloud over her usual self. She suddenly became more clingy and anxious around strangers and fearful in social settings.

In reality, we had no indication that something was wrong until the devastating diagnosis made on August 13th, 2011 in France, while on our summer holiday. We had just spent a wonderful holiday on the beach in Spain with her young cousins (whom she adores) and we woke up early on August 13th, 2011 to catch a flight to Nice. We remember how she came out of her bed with the biggest smile and in the best mood but we quickly noticed that she was dragging her left foot but did not complain of any pain or discomfort.

We decided we would look up a local doctor when we arrived in France later that day, but after a short flight, only hours later, we were alarmed to see it had worsened, and took her straight to the hospital emergency room. An MRI was done within an hour of doctors assessing her and determining that her entire left side was weak. After she returned from her scan, we waited in a room with a sedated Lyla, for more than a hour, after being told that a neurologist was coming to speak to us about “abnormalities” they had discovered. It was an excruciating wait full of panic and overwhelming fear and anxiety.

However, this was nothing compared to the horror of being taken away from Lyla, down a dark corridor, to a small doctor’s office, and told by two strangers that Lyla had Diffuse Intrinsic Pontine Glioma (DIPG), an untreatable, incurable, inoperable, aggressive brain cancer. That she was expected to only live months. The words were like painful, physical blows, difficult for the mind to assimilate and causing such extreme anguish that our reactions range from numb disbelief to absolute hysteria. In that moment, our lives changed forever.

As parents, we did everything we could to hide the reality of the situation from Lyla. However, as her illness rapidly took hold of her, she clearly knew and felt something was very wrong. We brought her back to London within days of her diagnosis and a week later, commenced her six weeks of radiotherapy. In the week before commencing radiotherapy, it was shocking how quickly Lyla was being affected by her illness.

She became extremely lethargic and unable to walk or move much. She could not move her left arm and her right eye could no longer move beyond a certain point as the tumour damaged the nerve. Even the look in her eyes changed completely. She was also on a high dose of steroids medication which gave her manic mood swings. She would lie on the couch and stare, gloomily and glassy eyed or sleeping for hours.

The only thing rousing her would be the desire to eat, her appetite greatly over stimulated by the steroids. Her emotions ranged from depressed to angry to highly anxious and irritable. At night, she would wake almost hourly, distressed and often desperate for food. Once radiotherapy (RT) began, she needed to fast from the early hours of the morning to have her daily general anaesthesia for each RT session. So, not being able to eat, being manic from steroids, and suffering the symptoms of her tumour, and not understanding why, made her nights brutal.

Of course, over time, she began to understand, accept and dread her daily routine of the drive to the hospital, the nurses’ checks, the General Anaesthetic room the unpleasant injections and gases and the canula I.V. needle bandaged to her hand each day. Lyla’s intelligence and perceptiveness of the situation made her very sad, pensive and deeply distressed about the prospect of each day.

When we would try to make her laugh or smile, she would turn her head and say “I don’t want to smile, I want to cry”. The six weeks endured for her radiotherapy were absolute, heart-wrenching, agony. Each day brought fear, pleading, screaming and hysteria and rage from Lyla and total anguish and heartbreak for us. She gained 20% of her body weight in two weeks, grew excessive amounts of facial and body hair, lost almost half of her beautiful hair in a ring around the back of her head and ears, and the skin on her neck and ears burned, peeled, cracked and bled. She was bruised from having daily injections and blood taking, and bore scars on her breast and neck from a Hickman Line (a subcuteaneous IV catheter surgically inserted under the skin to direct injections into the vena cava) that had to be prematurely removed after ten days when she suffered a raging infection that forced her to stay in hospital for a week with a blood transfusion and daily antibiotics.

Lyla’s eyes became dull, heavy and sad. It was as if their lights of joyful exuberance and childish innocence, were completely dimmed and darkened.

Despite the suffering she endured during radiotherapy, Lyla’s tumor remained stable for only two months during which time we traveled with Lyla to her favourite beach holiday, swam with dolphins on her birthday and went to Disneyland Paris. Shortly after her third birthday, we were informed that her tumor started growing aggressively again. Lyla’s condition deteriorated very quickly and she experienced the awful symptoms experienced by DIPG children (loss of ability to stand, sit up, speak, etc).

Lyla passed away in the early hours of January 24, 2012 in the arms of her parents. We miss her terribly. She was truly our pride and joy.