A Taste of Bay Plaza Presented by 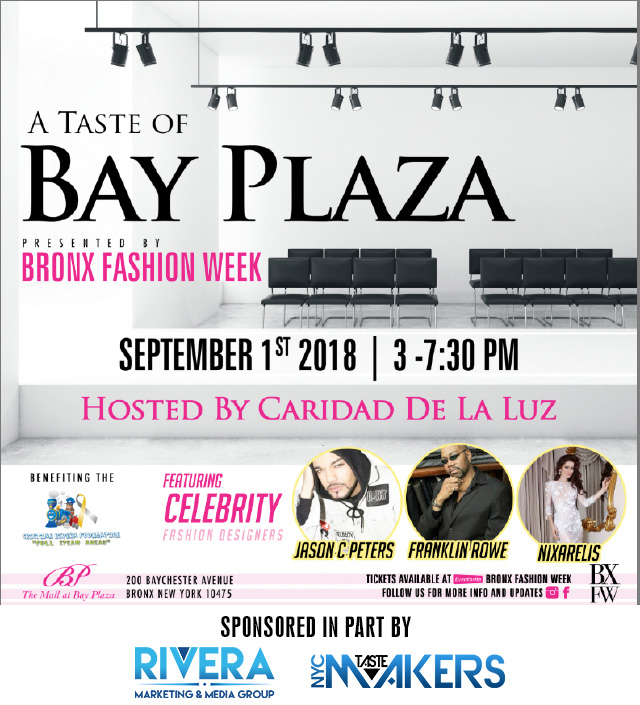 The Mall at Bay Plaza is an experience where life meets style. With over 100 stores & restaurants, it offers world-class shopping, dining & so much more!

Some may be surprised to learn that Bay Plaza and its neighboring towns are also home to some of the most exquisite and palette tantalizing restaurants in the Bronx!

On September 1, 2018, join us for an afternoon of Fashion, Food, Fun & Wine Tasting! All proceeds will benefit the Cristian Rivera Foundation. Come to the Mall at Bay Plaza where we showcase ‘’A Taste of Bay Plaza Presented by Bronx Fashion Week’’ hosted by Caridad De La Luz.

Known as La Bruja, Caridad De La Luz is a Bronx-born performer who recently performed in the successful Broadway musical I LIKE IT LIKE THAT as China Rodriguez. She is considered one of America’s leading Spoken Word Poets and was named one of the Top 20 Puerto Rican Women Everyone Should Know by who?. Caridad was presented with many awards in her life such as the Edgar Allan Poe Award, Puerto Rican Women Legacy Award, and Citation of Merit from the Bronx Borough President. She is a well-known public figure reaching to accomplish her dreams and give back to her community.

Diffuse Intrinsic Pontine Glioma (DIPG) is a malignant tumor found in the brain stem, which is the part of the brain that controls many vital functions. DIPG affects children of both sexes equally and is typically diagnosed in patients ages 5-9 and accounts for 10-15% percent of all childhood central nervous system (CNS) tumors.

Hop on board and together we can help the 300 children diagnosed each year.